John Harding, a former NGI chief scientist, was recently honored with the Robert M. Freeman Volunteer of the Year Award by Virginia Institute of Marine Science with The Commonwealth of Virginia's William and Mary University. Congratulations, John! 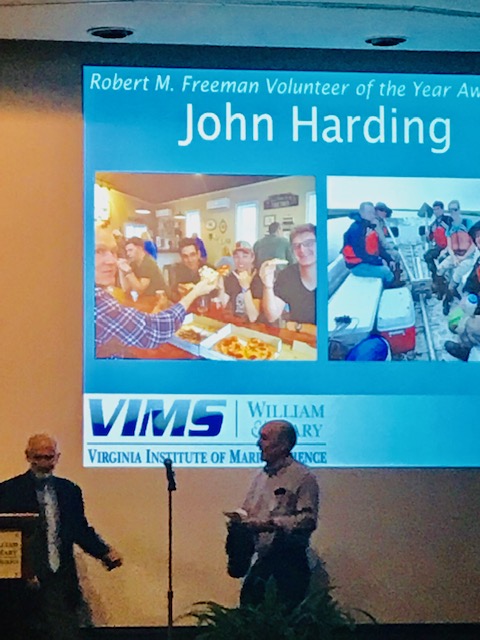 Dr. John Harding joined the Northern Gulf Institute as Chief Scientist in June 2009 and retired in May 2013. He earned his B.S. in Physics from the University of Miami in 1970, an M.S. in Marine Science from Scripps Institution of Oceanography in 1971 and a Ph.D. in Marine Science from Louisiana State University in 1987. Dr. Harding was formerly head of the Naval Research Laboratory's Ocean Dynamics and Prediction Branch from 1995 until 2002 when he became Chief Scientist at the Naval Oceanographic Office.

His position at NGI was a non-tenure track, full-time, faculty-equivalent research position. His primary responsibility was to provide leadership for the research programs of the Northern Gulf Institute, a multi-university, a research consortium led by MSU and located at the John C. Stennis Space Center. This position involved organizing and leading scientific teams conducting research funded by and in cooperation with the National Oceanic and Atmospheric Administration and other Federal agencies with responsibilities in the Gulf of Mexico region. The position reported to the Co-Director of the Northern Gulf Institute, located at Stennis Space Center.

As lead PI for the ~800K Shelf Hypoxia team under the COMT, Dr. Harding coordinated the initial proposal writing, the on-going research and the final report with members from 7 universities (including 3 NGI partners) and three federal agencies (NOAA, EPA, Navy). He presented the summary results with his shelf hypoxia team leaders at the AMS annual meeting (Harding et al., 2012)