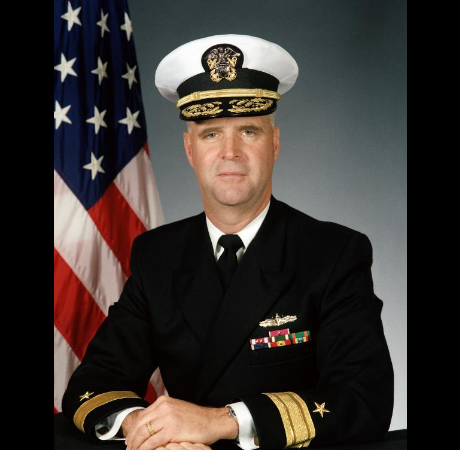 After a hard fought battle with melanoma, Ken passed away on July, 22nd 2018 in his Bay St. Louis home, guarded by his faithful dogs, Gunner and Navigator, while in the loving arms of his wife, Leslie.

Rear Admiral Barbor served with distinction in the United States Navy, including four sea duty tours, multiple shore staffs, and command of two shore facilities. He also culminated as the Commander of the Naval Meteorology and Oceanography Command at the Stennis Space Center in Mississippi from 1998 until his retirement in 2001.

Following his service to our country in uniform, Ken answered another calling, to become an educator. He joined the University of Southern Mississippi's Department of Marine Sciences as Director of the Hydrographic Research Center, where he both developed an internationally recognized research program and led the Department's Master's Degree in Hydrographic Science to a position of international prominence.

In 2002, he was asked to serve his country for nearly six years as the United States Representative to the International Hydrographic Organization in Monaco. He served in this role with distinction and returned to USM once again to educate students from all over the world and to develop MS graduates in Hydrographic Science that are recognized internationally for their expertise. Additionally, the program at USM was designated by the government as a national center of hydrographic expertise.

Ken was preceded in death by his father, D. D. Barbor; his mother and step father, Mary E. and Jack Tick; nephew, Johnny; and his faithful boat dog, Bosun.

He is survived by his wife, Leslie; his son, Matthew (Hattie); his two daughters, Margaret (Johnny) and Melissa (Jeremy); six grandchildren, with a seventh on the way; his brother, Dave; sister, Bobbie; two nephews, Danny (Bridget) and Joe (Kelly); six grand nephews; and his extended family from Monaco and New Zealand. He will be fondly remembered by those he held closest as a Shipmate Extraordinaire.