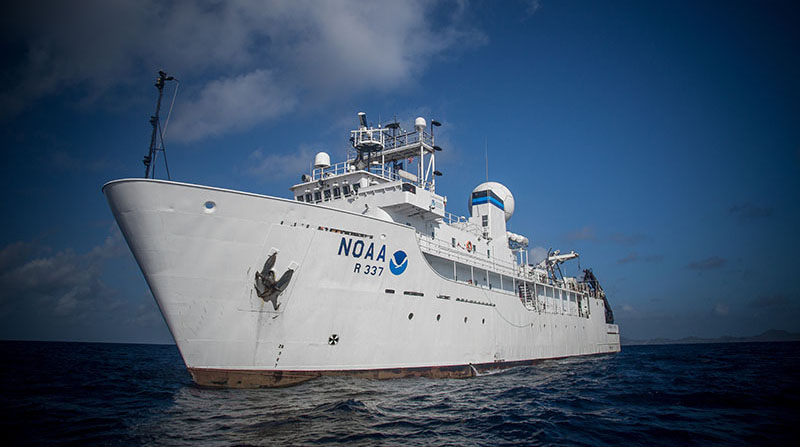 The Okeanos Explorer at sea. Image courtesy of NOAA/OER/Art Howard, OER.
The deep sea is the last undiscovered frontier on Earth that has the potential to harbor undiscovered biodiversity and significant geological features. In fact, NOAA scientists report that 95 percent of the ocean is unexplored, unknown and unseen by human eyes. To address this, NOAA's Office of Ocean Exploration and Research (OER) has operated the NOAA Ship Okeanos Explorer over the last ten years with a mission to systematically explore our largely unknown oceans for the purpose of discovery and the advancement of knowledge.

In the spring of 2018, the Okeanos Explorer explored the Gulf of Mexico. Researchers from Mississippi State University along with the Northern Gulf Institute collaborated with OER to share their combined scientific knowledge, technology and infrastructure to help scientists collect critical baseline information about unknown and poorly understood deep-water areas of the Gulf of Mexico.

The Okeanos Explorer embarked on two expeditions in the Gulf of Mexico between March and May of 2018. OER's Data Management Team, based in NOAA's National Centers for Environmental Information (NCEI), helped to ensure that the ship's newly-updated network continued to successfully transmit live images and scientific data over satellite and high-speed Internet to scientists observing at various land-based Exploration Command Centers throughout the country. NGI's Susan Gottfried, who works with NCEI as one of the data team leads, described how the team supported the two cruises, which produced over 11 terabytes of data.

We have been involved with the Okeanos Explorer from when it was first acquired by NOAA from the U.S. Navy and was being re-fit for ocean exploration. As a result, we have had the unique ability to assist in setting up the data pipelines off the ship so we could manage the data as best as possible with the most recent advances in technology,Gottfried said. Exploration increases the breadth of knowledge and research increases the depth of knowledge. The Okeanos Explorer is an exploration vessel that will hopefully catalyze further research. Our team is responsible for managing the data collected by the Okeanos Explorer and seeing that it is made available to a wide audience. 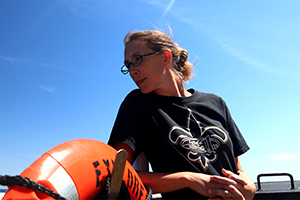 MSU's NGI Scientist Megan Cromwell on the deck of the Okeanos Explorer. Image courtesy of NOAA/OER.
Before the Gulf of Mexico 2018 expedition disembarked from port, the data collection and transmission equipment and two-way communication links had to be tested. Megan Cromwell, NGI research project manager, supported the Okeanos Explorer Gulf of Mexico Technology Demonstration as the onboard data team management lead. During this cruise from March 23-April 5, the Okeanos Explorer conducted its first emerging technology demonstration projects with partners including the Naval Undersea Warfare Center, Cooperative Institute for Ocean Exploration, Research & Technology, and the Center for Coastal and Ocean Mapping at the University of New Hampshire. Cromwell was onboard the ship to coordinate and supervise the data management processes.

"We work with the shipboard data and equipment management team, the Global Foundation for Ocean Exploration. GFOE is a nonprofit that develops the tools and equipment that gives the marine science community the capabilities to explore the deepest depths of the ocean that have never been studied before. For instance, they manage the ROV, the sensors that send data via low internet broadcast streams like WiFi or Bluetooth, and satellite connections aboard the ship," Cromwell explained. "In turn, we work with them to ensure what sensors we are going to use, and that our digital data management systems are successfully interacting with the underwater and collection equipment. Im ensuring we have the best data quality control via our digital data management systems." 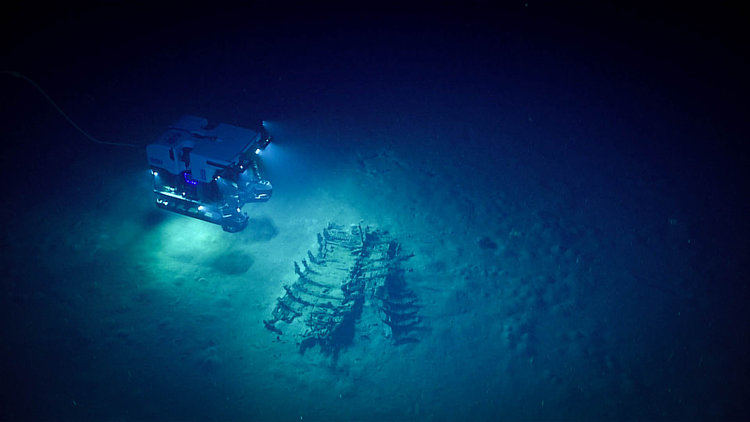 ROV Deep Discoverer explores the cultural heritage site during Dive 02 of the Gulf of Mexico 2018 expedition. Image courtesy of the NOAA/OER.
During the expedition the team performed operational tests to ensure data like dissolved oxygen, nutrient profiles and chemical as well as physical oceanographic profiles could be collected, were of the best quality available and were transmitted to shore successfully. When not onboard, the team is responsible for ensuring that the data collected with the remotely operated vehicle (ROV), Deep Discoverer, along with a lineup of other digital instruments including ADCP, XBT and CTD casts, multi-beam, sub-bottom, and single-beam sonars, surface oceanographic and meteorological sensors, video, imagery, and processed dive and video data products are successfully collected and transmitted to shore.

After the onboard and shore-based high-tech equipment passed inspection, the Gulf of Mexico 2018 cruise set off to explore new frontiers within deep coral and sponge communities, bottom fish habitats, undersea canyons, shipwrecks, and a variety of chemosynthetic habitats including cold seeps, mud volcanoes and brine pools. Using NOAA Ship Okeanos Explorer's unique capabilities, scientists and audiences onshore viewed the expedition live via real-time video footage from deep-water areas (up to 3,010 meters) of the Gulf of Mexico. 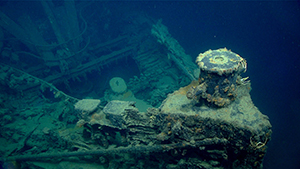 Bow end view into the hull of the wreck of the tugboat New Hope. In 1965, the U.S. Coast Guard performed a daring helicopter rescue of the New Hope's crew during Tropical Storm Debbie and saved everyone aboard. Dive 01 included the first ever collection of images at this submerged maritime heritage site. Image courtesy of NOAA/OER.
NGI's Matt Dornback organized a group of scientists, including from within NGI, to actively participate in the dives by annotating the video as it is recorded with biological and geological observations. During a few of the expedition's 15 dives, NGI senior research associate and NCEI habitat specialist, Kate Rose annotated with keywords identifying geological features in real time from the NOAA Exploration Command Center at the MSU Science and Technology Center located at the John C. Stennis Space Center, while biologists at the NOAA Deep Coral Ecology Lab in Charleston, South Carolina identified and annotated the biological species.

Every sixty seconds a still image generated from the video feed would pop up, and we have to identify and tag that still image. It is a challenge when a new species shows up, Rose explained. The annotators are trained to use the video annotation software, which is preprogrammed with keywords from the Coastal and Marine Ecological Classification Standard that gives us keyword options and categories to select from, which does make the categorizations and digital catalogs more organized because we all use the same classification system and language. 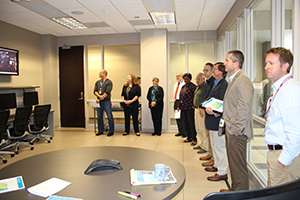 Clint Edrington, Jonathan Jackson and Kate Rose organized a NOAA Okeanos Explorer and ECC Open House. Staff from CNMOC, NVO, NRL, and NOAA at Stennis interacted with scientists onboard the Okeanos Explorer at the NOAA Ocean ECC at the MSU Science and Technology Center. Image courtesy of NGI's Barbara Ambrose.
Lauren Jackson, an NGI scientist, was the sample data manager onboard the Okeanos Explorer. Working in the ship's wet lab, she collected the physical specimens off the ROV and made sure they were properly imaged, labeled, categorized and cataloged in the Sampling Operations Database Application, which NOAA's National Center's for Environmental Information developed and deployed. The Okeanos Explorer was exploring the Gulf of Mexico with a focus on unmapped areas, deep-sea coral and chemosynthetic communities, when they discovered a sea star, which experts think is likely a new species.

Working on the Okeanos is pretty much my dream job; it is one of those life goals that was on my bucket list. I feel really fortunate because it is a very amazing thing to be a part of pure exploration. I never thought in my lifetime that I would get to explore the unknown because most of the Earth's terrestrial base has been discovered, Jackson explained. It is essential to make sure everything is logged in to the database correctly so the public can easily access whatever we discover and that nothing is lost. The biggest part of my job is to catalog correctly so the public and the scientists can retrieve the information easily. 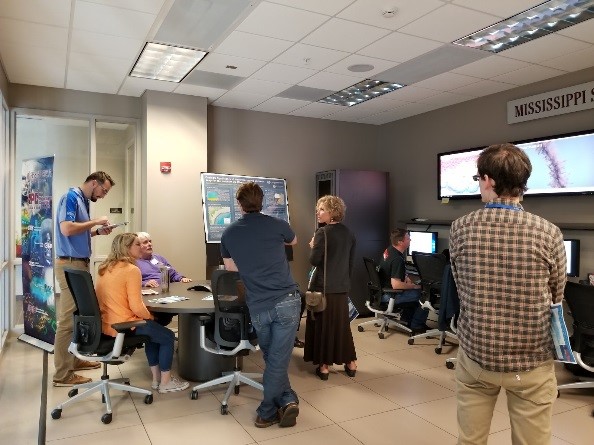 Kate Rose and Jonathan Jackson hosted on shore expeditions with scientists from the Bureau of Ocean Energy Management. BOEM interacted with the Okeanos Explorer at the NOAA Ocean Exploration Command Center at the Mississippi State University Science and Technology Center. Image courtesy of NOAA/Angela Sallis, NCEI.
Another Mississippi State NGI research scientist that was part of the NOAA Okeanos Explorer expedition team is Adam Skarke. The Mississippi State professor is a marine geologist and served as the ship's co-lead scientist. On prior NOAA expeditions, Skarke served as an NOAA scientist and used sonar systems and robotic submarines to investigate seafloor methane seeps that he helped discover. In the role as co-lead scientist on this expedition, Skarke facilitated scientific discussions between onboard researchers and shore based scientists, environmental managers, archeologists, and students interacting through telepresence technology from the exploration command centers around the country including the one at Stennis Space Center. The expedition was also streamed live over the internet to participating scientists as well as the general public, and Skarke's voice was one that people were likely to hear during the live video feed of the expeditions.

"I was in this public role on a day-to-day basis. As the participating scientists were sharing their high-level expertise on what we were observing in the deep-sea, there were numerous members of the general public, including students, watching from aquariums and schools and following along. I tried to explain our exploration work and clarify technical terminology in a way that was easy to understand," Skarke said. In managing the scientific aspects of the expedition, the other co-lead scientist and I were representing the research interests of hundreds of participating scientists, and synthesizing all of their requests into one exploration plan. We of course had to make some compromises to reach a consensus, but made sure that participating scientists recognized that their proposed exploration ideas were valued and heard. 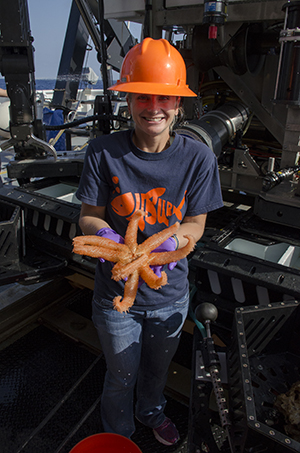 Lauren Jackson manages specimens collected in the Gulf of Mexico, like this sea star, which may be a new species. Image courtesy of NOAA/OER/NCEI.
Over the course of the 2018 Gulf of Mexico expedition Okeanos Explorers team participated with over 85 scientists, managers, and students in the United States, Japan, Russia, Norway, the United Kingdom, and Canada participated as members of the science team through telepresence.

One of the most exciting and rewarding things about participating in an Okeanos Explorer expedition is that you are continually exploring locations in the ocean that on one has ever seen before. Because of this, there is always a possibility that you may see a new species of animal or previously undiscovered seafloor feature, and very often you do.

Mississippi State, the NGI and NOAA's OER are planning to work together along with NOAA's NCEI to share resources and scientific knowledge on future Okeanos Explorer expeditions that will explore new areas of the Gulf with the hope to discover new marine species or geological features that advance the knowledge of ocean science. To learn more about how NGI and NCEI scientists support OER, visit www.ncei.noaa.gov.

The Northern Gulf Institute conducts high impact research and education programs in the Gulf of Mexico region focused on integration of the land-coast-ocean-atmosphere continuum; integration of research to operations; and integration of individual, organizational strengths into a holistic program.

The NOAA Office of Ocean Exploration and Research is the only federal organization dedicated to ocean exploration. By using unique capabilities in terms of personnel, technology, infrastructure and exploration missions, OER is reducing unknowns in deep-ocean areas and providing high-value environmental intelligence needed by NOAA and the nation to address both current and emerging science and management needs.