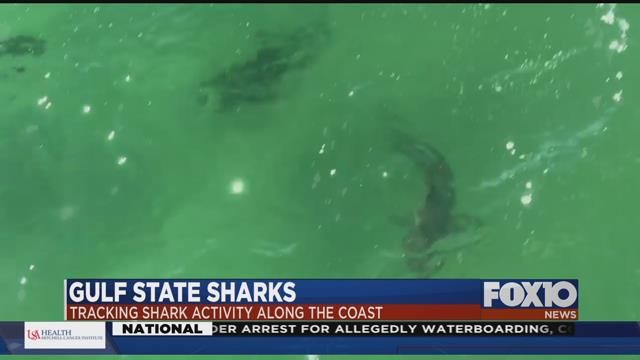 For anglers on the Gulf State Park Pier, fishing isn't just a pastime; it's a way of life.

"I've been doing it since I was eight years old," said Glenn Wilson.

The sharks nearby are also looking for a meal, making it hard to reel in a good catch. Anglers say they've seen everything from full-blown feeding frenzies to tiny shark pups.

Even when you can't see them from the surface, drone video from the Mississippi-Alabama Sea Grant shows they are always swimming nearby -- sometimes just feet away from the shore.

"There are more sharks here now than there has been in the past," said Wilson. "The sharks have never been this thick, and now I think they need to do something about it."

To the anglers, it's frustrating, especially when it's against state law to catch the sharks and bring them on deck.

"I think we should be able to kill them and thin them out," said Wilson.

"I sympathize with all those anglers, but the story is a little more complex than that," said Dr. Marcus Drymon, a shark expert with Mississippi State University and the Dauphin Island Sea Lab.

Drymon and his team are researching ways to help the problem between sharks and fishermen both offshore and on the pier.

He let us tag along for part of his research. Alabama Marine Resources took us out on a boat near the pier. We couldn't get too close because boats have to stay 100 yards away. For Drymon, it's still the perfect opportunity to measure the temperature, salt, and oxygen in the water. This research is critical to understanding the environment these sharks like.

We're told the majority of sharks near the pier and off Alabama's beaches are blacktips, which are easily spooked. The average length of a blacktip shark is 4.9ft.

As we idled near the pier, we spotted large schools of baitfish. Dyrmon said that along with the pier's structure and cleaning stations, the presence of bailfishy provide a perfect paradise for the sharks.

When asked whether there is an increase in local sharks or if they are being noticed more,"It's both. It's definitely being noticed more. More people are out here fishing. However, I will say it is equally a measure of a shifting baseline. Twenty years ago, or 10 years ago even, a lot of these populations of sharks were really over-harvested. Due to conservation efforts, we are starting to see the shark populations recover," replied Drymon. "It's something we hope to see in a healthy ecosystem, so the fact that we are seeing sharks in this part of the world is a healthy thing."

Instead of killing the sharks as a solution, Drymon is looking into different tackle and hooks that anglers can use, along with underwater magnets to deter them. He is currently in the process of applying for hundreds of thousands of dollars' worth of federal grants for the research.

For some anglers back on the pier that research is an encouraging start.

"Yes, and we've been kind of following that," said Jodie Tucker. "Something needs to be done."

"The sharks have more to fear from us than we do from them," said Drymon on the way back to shore. "The more you get to know the sharks as a species, the more you can appreciate how absolutely incredible they are."

Officials from the Alabama State Parks department tells us they are also aware of the shark problem. They recently did an in-depth survey of almost a thousand anglers, where almost 60-percent said they were not happy. The agency is exploring the option of controlled shark fishing.

At the end of the survey results, Alabama State Parks included this statement:

"To respond to angler concern and requests, the Alabama State Parks Division is exploring immediate options for special and controlled shark fishing opportunities at the Gulf State Park Pier. This would provide a recreational activity requested by park visitors while also potentially helping mitigate the shark problem reported at the pier."

To read the full results of the survey, click here.